Saving energy doesn’t require sacrifice. It also doesn’t have to be complicated, thanks to occupancy and vacancy sensors and home automation systems.

Residential sensors are available for less than $20 per switch. Installation is relatively simple, and setup involves only basic programming. Because occupancy and vacancy sensors work with many kinds of lightbulbs—incandescent, fluorescent, and LED, to name just a few—they can easily integrate into an existing home lighting system.

For those looking to save energy on a larger scale, home automation systems are a convenient way to manage home energy use. They can be controlled in the house or remotely via mobile devices and be programmed to maintain specific conditions to make energy savings even more convenient. By monitoring and displaying energy use, home automation systems can also teach homeowners about their energy habits and ways to improve efficiency.

Although a home automation system is likely to result in savings over time, it requires an initial investment of $5,000 to $15,000. This includes components such as the control box, monitor screen, individual subsystems, and computer software.

Photo of a modern house that features two separated modules.
For Solar Decathlon 2013, the Southern California Institute of Architecture and California Institute of Technology team installed a house monitoring and automation system in its DALE house. These whole-house systems monitor and display energy use, which helps homeowners reduce their energy consumption. (Credit: Jason Flakes/U.S. Department of Energy Solar Decathlon)

Many U.S. Department of Energy Solar Decathlon teams have featured home automation systems in their competition houses. For example, in 2013, the Stanford University team installed a home automation system in its Start.Home. The system gathered electricity and water use data and provided continuous feedback to educate and inform the decathletes and visitors. The Solar Decathlon 2013 Southern California Institute of Architecture and California Institute of Technology team also installed a home monitoring and automation system in DALE. This system monitored energy and water consumption while collecting energy-generation data from the house’s photovoltaic array. 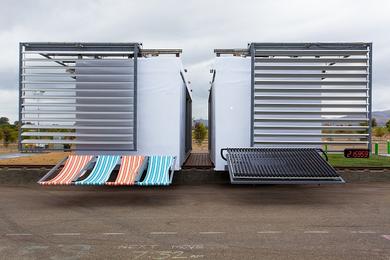