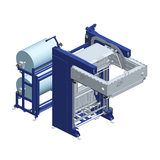 The automatic hooding machine model AT53 applies a hood of tubular stretch film to palletized product.

Its hot air generation system through linear gas burners is designed to work either with methane or propane gas (type approval number DG2217BL0557 issued by the German Gas Institute valid in all EU countries).

Hood preparation takes place on the back part of the machine, while hooding and thermoshrinking take place on the front side.

The AT53 machine is available with one, two or three coils of tubular film of the same, or different sizes.
All automatic and manual operations are managed through a PLC. The operator’s presence in necessary only to change the film coil. 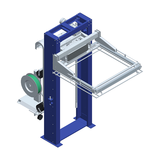 The machine is developed and engineered according to the most modern design criteria and equipped with all devices to automatically carried out all strap feeding, centering, recovery, welding and cutting operations, as well as the strap compensation and tensioning device in order to ensures a uniformly on all the sides of the pack.

The machine is it designed to be insert in fully automatic lines, where it exchanges signals with devices installed upstream and downstream, or can operate in total autonomy. 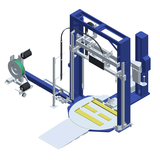 The model 08 Combo is a combination of an automatic vertical strapping and turntable wrapping machine. The suitable solution for any needs regarding a low production with an high variable mix of products.

Thanks to the welding & cutting device the cycle of this machine model completely automatic.

All the operating cycles of the machines and the individual devices may be programmed through a single operator panel.

Depending on the dimensions of product to be packing, the machines may be equipped with appropriate turntable diameter.

1949
In 1949 Maurizio Rossi and Luigi Cristina founded the company Officina Meccanica Sestese in Arona (Northern Italy). In those difficult post-war years, the Company undertook the important task of producing equipment and accessories for the brick and tile industry.

1958
OMS’ production soon asserted itself on the market so much that after a few years it became necessary to change premises. So, in 1958 a new plant was inaugurated in Arona where it continued to produce technologically advanced kiln equipment.

2004
Acquisition of OMSTRAP in - Sandigliano (Biella), for strap and consumables production

2010
ISM bundle strapper, for the paper and cardboard industry

2018
Today, Officina Meccanica Sestese offers a complete range of end-of-the-line packaging machines and systems. Thanks to

the great reliability of its machines, guaranteed by years of experience, and its production versatility, OMS Group can satisfy all market requirements from the simplest strapping machine to the most sophisticated packaging system.

2019
Officina Meccanica Sestese celebrates its 70th anniversary.
An important milestone in our History.